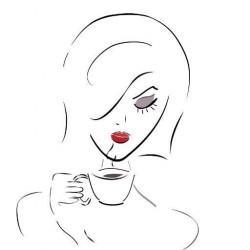 In Love with Romance

Reader of romance and sometimes writer. Lover of many things including music, wine, and chocolate.

All her life Kaitlin has dreamed of becoming Carter's wife. She saves herself for him. She never strays. She always does everything right with the hope that one day Carter will bother to finally look at her. Well, that never happens. Now she's brokenhearted. He's getting married to none other than her SISTER.

She's such a masochist, she helps her sister with the wedding plans and the flowers. But inside her, sadness, frustration, and anger are eating at her.

Meanwhile Beckett, the town's bad boy and her brother's best friend, has always had the hots for her. She finds this out when she tries to seduce him into making love to her.

Their night is supposed to be a one-night-only affair, until Kaitlin finds she's pregnant wit Beckett's baby. That's only the beginning to the obstacles they both have to overcome.

Predictable. Done one-thousand times over. But who cares! I liked it. Kaitlin got on my nerves with all her what if's and wanting to have the perfect plan. I got to a point where I wanted to scream because her thinking process got a bit ridiculous. I was all: Helloooo, you got a baby on the way, what do you expect? And then Beckett immediately jumping to the "Let's get married" was a bit overdone. That was another Helloooo.... it's 2015, no man jumps at the "Oh I got her pregnant so I'm going to marry her" especially not after a one-night-stand. Still, you gotta love Beckett when he does this. Nice of him, just not something that happens nowadays. It would've been different had this been a historical. Then maybe I would've given it a 5 stars... because really, who doesn't like the baby trope? I do anyway. And it's perfect in historicals. But I digress. One other thing that drove me nuts was Beckett not telling Kaitlin's brother the truth about the money that went missing from the shop. That got boring as the story went along. And when they finally talked, why was it such little money? I would've thought it would've been thousands of dollars not just a mere one-thousand. Really, a grudge over one-thousand dollars? I rolled my eyes at that. Also, I felt like Beckett should've given up Craig, if he was the real culprit. Oh well. Still. This was a fun, short read and Nicole Helm is now on my list of authors to look for.
Tweet